San Javier is a residential area, occupying a hilly sprawl at the western edge of Medellín. It is one of the most densely populated parts of the city and stretches over 74.2 km2. Whether you’re planning a trip to Comuna 13 or simply want to know more about safety across Medellín, here’s everything you need to know about San Javier.

At one time, Comuna 13 was the most dangerous district in Medellín, plagued by violence at the hands of guerrillas, paramilitary groups, drug cartels, and local gangs. These days, the Comuna is safer and tours regularly run here; however, it is important to note that the area still faces issues with crime and gang violence.

During the day, if you choose to explore with a group and follow basic common-sense rules to stay out of trouble, you’ll be fine. In the evening, foreigners are best to avoid San Javier, unless especially familiar with Medellín and confident speaking Spanish. We also recommend checking the news or asking around before visiting – sometimes there are periods of high violence and people are advised not to go. 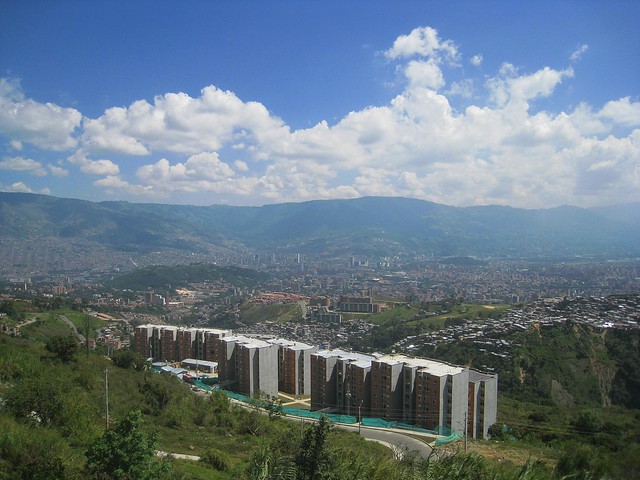 San Javier is compiled of 16 barrios (neighborhoods). They are:

The most populated barrios are Juan XXIII La Quiebra, followed by La Independencia, and El Salado.

In addition to having a younger population, Comuna 13 is also predominantly in the lower strata tier. The strata system is a socio-economic scale used throughout Colombia: 1 is the lowest, while 6 is the highest.

Comuna 13 is roughly divided as follows:

In the last 20 years, Comuna 13 has been an epicenter of violence and struggle for criminal control within the Medellín valley. As a result, residents of all ages have been caught in the crossfire, and forcibly displaced from their homes.

San Javier has long been an area of strategic importance to guerrilla and paramilitary groups, as well as gangs looking to control the San Juan Highway leading west out of the city (and north to the Caribbean coast). By controlling the highway, criminals can control the illegal goods flowing in and out of Medellín, and much of Colombia.

On October 16, 2002, the Colombian military launched the controversial Operation Orion to remove left-wing rebels from the area. The result was more than 300 forced disappearances – a tragedy that remains painfully fresh in San Javier today. And while the operation did remove the left-wing rebels, their presence was almost immediately replaced by a paramilitary group lead by “Don Berna,” an heir of Pablo Escobar.

In 2010, more than 10 percent of the city’s 2,019 homicides occurred in San Javier. On September 21st, 2010, Juanes, a Grammy-winning singer and Medellín native, organized a free concert to promote peace in Comuna 13. He was joined by J Balvin, Jowell & Randy, and other artists.

By trying to save their communities with their words, music, and art, hip hop artists drew the wrath of the gangs, with 10 hip hop artists being murdered since 2009. Dozens more were forced to flee their homes.

More recently, the western periphery of Medellín, including San Javier has been infiltrated by local crime syndicate La Oficina and paramilitary group AGC. Because of the Comuna’s turbulent past, when gangs have been removed, a power vacuum is formed that causes fighting between other gangs to take control. From January 1st, 2018 up until June 30th, 38 people were killed in San Javier. Almost all of the victims were shot, and 26 of the murders were deemed to be related to organized criminal groups.

With that said, it’s crucial to consider these statistics in context. San Javier undoubtedly has its problems but it is El Centro that has the highest homicide rate in Medellín. El Centro also has the highest number of robberies, followed by El Poblado and Laureles-Estadio.

It would seem then that San Javier is in a state of transition, whereby it wants to move away from its violent past – and has the backing of the government – but cannot shake the deep grip of criminals in the area. Nonetheless, that hasn’t stopped flocks of tourists heading to Comuna 13 on a daily basis to witness communities in the barrio promote change.

The metrocable and the esclators are the main points of interest in San Javier. Both were established to improve residents’ access to the city, and have contributed to the Medellín’s international acclaim for urban renewal.

In 2011, a series of six covered escalators rising 400 meters up the very steep barrio were constructed in Comuna 13. The escalators are great fun to ride and soak up the vibrant life around, plus have had a huge impact on the people living nearby who experienced improved social mobility.

The escalators can be accessed via a short bus or taxi ride from the San Javier metro station, and are free to visit. Most people spend a few hours in the space around the escalators, which is now filled with local artwork, music, food, and dancing. As the area has become a tourist attraction, we encourage visitors to be extra diligent about where their money goes – aim to pay for things that directly support the community.

The area and walls around the escalators are decorated with long stretches of colorful graffiti. This artwork has become a huge draw for extranjeros – who come to learn what the paintings represent and to snap a photo with the vibrant backdrops. The majority of the art is done by locals residents and artists, who use animations and pictures to tell a story about their neighborhood. This soon became a tradition in the comuna – using art to reinvent the streets and encourage people from other parts of the city to visit.

There are a number of tours (in English and Spanish) that offer in-depth descriptions of the graffiti, as well as the difficult history San Javier has had to overcome. We recommend signing up for a tour given by members of the community to ensure the money supports local causes.

Having opened in 2008, the San Javier metrocable (Linea J) runs to and from La Aurora – a barrio particularly high up in the hills. There isn’t a whole lot for tourists to do in La Aurora (the neighborhood is primarily residential and not deemed safe for extranjeros), however, the journey itself is spectacular. Soaring over the maze-like rooftops, the river, and even up and over the valley, this metrocable gives one of the most striking views of Medellín. The cost is integrated with the metro system for a flat price of $2,550 COP.